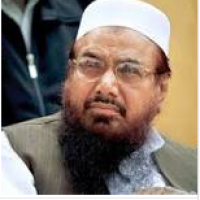 Hafiz Muhammad Saeed is a Pakistani Islamist militant, who is a co-founder of Lashkar-e-Taiba and the chief of Jama'at-ud-Da'wah, UN-designated terrorist organisations operating mainly from Pakistan.
India considers Saeed as one of its most wanted terrorists because of his ties with Lashkar-e-Taiba and his alleged involvement in attacks in India such as the 2008 Mumbai terror attacks, 2006 Mumbai train bombings and the 2001 Indian Parliament attack.