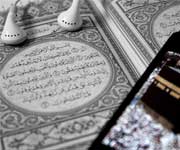 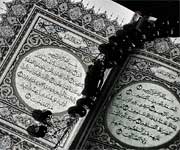 Without any single doubt, Islam is the fastest growing religion on the planet and it’s the second largest religion in the world as well. You can imagine the power of this religion by the fact that there are more than 1.8 billion Muslims are present in all the corners of the globe. From Australia to Europe to America, you will find Muslims everywhere for sure. Darsaal is an online place where you will get tons of information regarding Islam Religion including Al Quran recitation, translation in Urdu/English, MP3 and video Naat Sharif, Prayer Timings of all cities in the world, Sehr o iftar timings, Hadith books with Urdu Translation in searchable text format and much more.

Islam is a an arabic word and Islam meaning is " Religion of Peace". Today you can find millions of muslim around the world offering five prayers a day. A muslim is not a good muslim if he does not practice Peace in his every day life.

We have published a huge collection of Islamic data in our Islam section so that every user can get all the details regarding Islam. Read the complete Holy Quran online from here as well.

The core belief of the muslims is that there is no God except Allah and Holy Prophet Hazrat Muhammad (PBUH) is the last messenger of Allah Almighty. We also deliver the audio Quran Tafseer for the Islamic followers. From this page, access the massive collection of content regarding Hadith Shareef and translation of all 6 books known as Sihah Sitta. Masnoon Duaein can also be seen from this section.

Before the advent of islam, the people of Makkah were living an arrogant life. They used to worship the Idols and there was no cocept of one God among them. Then Prophet Muhammad (P.B.U.H) was born in Makkah. He used to pray to One God even before he was given Prophethood.

However, when He reached to 40 years age, He was blessed with the Prophethood of Islam. He became the Messenger of Allah, after a messege of Allah reached him, when He was praying in Cave Hira one day.

He Started to preach the religion of Islam, but no one belived him in the early days. Only his companion Hazrat Abu bakr Siddique accepted Islam Religion. Soon, People of Makkah became his enemies so he traveled to the City of Madinah.

However, the citizens of Madinah turly wellcomed Him by warm hearts. Soon, Islam begun tu spread to the sorrounding of Madinah. After few years Prophet Mohammed moved back to Makkah with thousands of His followers.

Islam mainly focuses on the basic rights of the common people. However, there are five pillers of Islam religion, known as Kalma Tayyaba, Prayer, Fast, Zakat and Hajj. Moreover, Islam is the first religion to give rights not only to the women, but non muslims as well.

Prophet Mohammed preached islam and peace in his teachings. Now a days, Islam is the second largest religion in the world, practiced by almost 1.8 billion muslims.

It’s obligatory for the Muslims to pray five times a day, hence for the Muslims all around the globe, we brings all the information regarding Prayer timings world wide. Not only that, but also the latest Ramadan timetable is available on our Islam category.

Information regarding Islamic Calendar can be seen here as well. The tale doesn’t end here because from our website you can view the thousands of Islamic names in just a single click. Visit Darsaal.com and all the Islamic stuff will be at your fingertips.